“The Bride Collector” by Ted Dekker 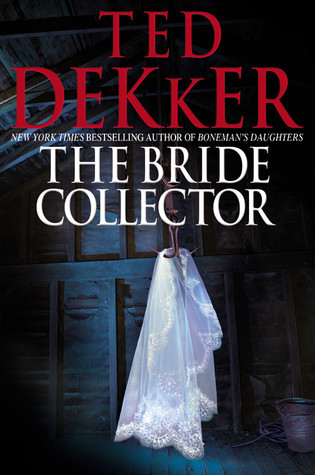 Finished this book yesterday.  I’m now convinced that I won’t like any of Dekker’s new books as much as I liked some of his earlier ones.  I’m not saying that this one wasn’t good — it was!  It just wasn’t nearly as good as some of his others that I’ve read.  I finished it quickly because I wanted to read the end and see how everything turned out.  (I have a pretty strict “don’t read the end until you’ve read the rest of the book” rule that I try very hard to follow.)  The ending was pretty satisfying.  The result of the conversation between Brad and Quinton toward the end was pretty predictable, but there’s nothing necessarily wrong with that.

I will say this:  If you read and enjoyed “Adam“ (also by Ted Dekker), you will probably enjoy “The Bride Collector“.

(from goodreads.com)    FBI Special Agent Brad Raines is facing his toughest case yet.  A Denver serial killer has killed four beautiful young women, leaving a bridal veil at each crime scene, and he’s picking up his pace.  Unable to crack the case, Raines appeals for help from a most unusual source: residents of the Center for Wellbeing and Intelligence, a private psychiatric institution for mentally ill individuals whose are extraordinarily gifted.  It’s there that he meets Paradise, a young woman who witnessed her father murder her family and barely escaped his hand.  Diagnosed with schizophrenia, Paradise may also have an extrasensory gift: the ability to experience the final moments of a person’s life when she touches the dead body.  In a desperate attempt to find the killer, Raines enlists Paradise’s help.  In an effort to win her trust, he befriends this strange young woman and begins to see in her qualities that most ‘sane people’ sorely lack.  Gradually, he starts to question whether sanity resides outside the hospital walls…or inside.  As the Bride Collector increases the pace and volume of his gruesome crucifixions, the case becomes even more personal to Raines when his friend and colleague, a beautiful young forensic psychologist, becomes the Bride Collector’s next target. The FBI believes that the killer plans to murder seven women.  Can Paradise help before it’s too late?    (from goodreads.com)