A Duty To The Dead by Charles Todd 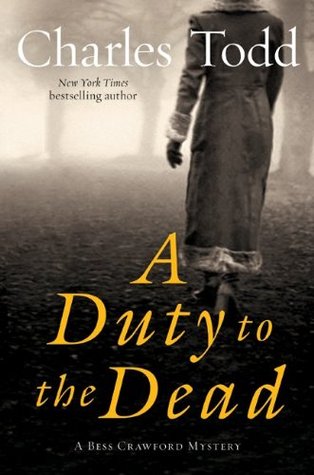 A Duty To The Dead
(Bess Crawford #1)
by Charles Todd

I would have probably called this a fairly slow-paced book before I realized that, though it felt like I couldn’t have made it very far, I had already nearly made it halfway through! It’s a paradox: slow, yet fast. Makes no sense & I really don’t know how to explain it, but I like it. And the pace does seem to pick up as the story goes along.

All in all, I really liked this book! The characters, setting, and storyline were all interesting. While I did predict part of the ending, some of it was still quite a surprise to me. I’ll admit I was saddened/disappointed by part of it, but not so much that it took away from the story or anything.

The narrator (Rosalyn Landor– who also read Death Comes to Pemberley, which I really enjoyed) is one of the best I’ve listened to. She has an easy voice to listen to. Listening to this book was almost like watching a BBC mystery film. 😉

Warning: This is not Christian fiction so, while there isn’t anything of a sexual nature, there is bad language throughout the book.

I hadn’t realized that a break in a bone could be so exquisitely painful.  I’d feel a greater tolerance for the the wounded after this.

We left the flat together.  I expected– dreaded– Mrs. Hennessy popping out her door and asking who my young man was.  “An escaped murderer, Mrs. Hennessy; my father will be horrified.”  But she didn’t come out her door…