A Chance At Forever by Melissa Jagears 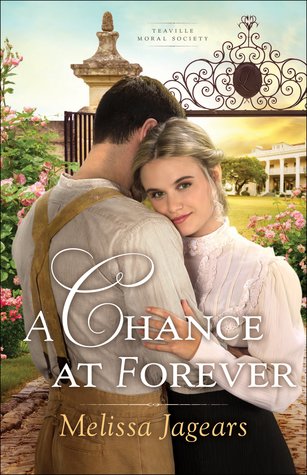 A Chance at Forever
(Teaville Moral Society #3)
by Melissa Jagears

Two good, mostly uninterrupted, afternoons of reading and this book was finished!  Obviously, it was a pretty fast read for me. 😉

I was a bit disappointed in the first book (A Heart Most Certain) in this series– not because it was bad or anything (it was pretty good), but because I was unable to connect with any of the characters– and I will admit that had me a bit worried going into this book.  However, I ended up really enjoying this one and flying right through it at near record speeds!

These characters felt much more relatable and I even liked the characters from the first book better in this one.  It sounds terrible to say this, but… I actually really loved that the main character is missing her hand.  See what I mean? That’s such a horrible thing to say, right?! 😦  And yet, it’s still true.  I’m pretty certain that the only books I’ve read where a character was missing a limb were cases of soldiers having been injured in battle so this– a girl being born without part of her limb and having to grow up suffering through the teasing, bullying, etc. as a result– was a new and quite interesting perspective, especially, I think, for a historical fiction book.  It’s not something that you typically see and I though it was very well written!

I feel like I really can’t say enough about these characters.  Mercy is a beautiful, realistic, totally relatable mess of kindness and compassion… and bitterness and unforgiveness. She really made me consider my own actions toward certain people– how I can have kindness and compassion toward some, but what about when I am confronted by those who have hurt me?  Do I express that same spirit toward them or do I stubbornly harbor those hard feelings that most people would never even realize I have?  Food for much thought right there, let me tell ya.

And Aaron… Sweet, hurting, repentant Aaron.  He is such a different person now than he was when Mercy knew him as a child.  God has worked such a transformation in his life and it shows in every way.  Oh, I cried over this man… I have no shame in admitting that.  Seeing how badly he desired forgiveness for all the hurt he had caused years ago– the lengths to which he went to show others how sorry he was for what he had done– and seeing how he wanted to be a different, better man and wanted to use his past and his present to impact others like his younger self and show them God through his own life.  How could a reader not love this character?

In the end, I was left with some questions and felt that some of the secondary characters’ stories didn’t end in quite as satisfying a way as I would have liked, but that is a bit of reality that should be expected.  Overall, this book is one I am glad to have read and one that I will likely read again.  The pain, the struggles, and the ultimate forgiveness and growth of these characters makes this the type of story that resonates in hearts and minds, lingering long after the final page has been read.

I received a free copy of this book from the publisher. I was not required to write a positive review, all opinions expressed are my own.

I highly recommend this novel, and the entire series – for fans of entertaining yet challenging historical fiction with a sweet romance.  Read more…
~Beth

I don’t know what else to say except that I absolutely adored this book, highly recommend it…  Read more…
~Caitlyn

Overall, the storyline was amazing. I have never read a plotline like this, and I think it was so well written.  Read more…
~Nicki

The only tool she had was prayer, and if that was so, why didn’t she use it more often?

“Being moral isn’t doing what’s easiest or what makes you feel comfortable, but rather, it’s choosing to do right even when it hurts, when it costs, when it’s difficult.”

Aaron: “No one’s going to notice that wet spot since his [the baby’s] toes are exposed for all the women to gush over.”