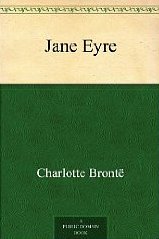 This picture—  Because my copy is a lovely hardback and I do not like any of the paperback covers that I’ve seen.

I liked Naomi’s review so much!  And I hadn’t written one for this book myself so…..  I asked her if she would be okay with me sharing her review here.  She said I could! 😀  So here it is:

This book is just UTTERLY everything. It’s big. It’s romantic. It’s creepy. It’s surprising. It’s pretty. It’s well-written. And really, writing a review for such a wow-book is so hard. This is a book that has pleased and made millions of people happy ever since it got released which was a long time ago. THANK YOU, CHARLOTTE BRONTE. You are superb.

Why I LOVE LOVE LOVE Jane Eyre:
1. Everything is different to most books. Nothing – except the annoying aunt-thing – is stereotypical. Jane is a darling heroine. Plain, always to-point, taking life as it is. She’s a true heroine and she deserves so STINKING much it just riles me! She could definitely be my friend. Now, the same goes for Mr Rochester. While he is definitely not my favourite hero (I mean, REALLY, some of the questions he asks and the things he says are just over-the-top weird) but he’s so DIFFERENT. You won’t ever, ever find any hero like him again. He’s ONE of a kind and I love that.
2. The plot. I know this story super well, but the interrupted wedding scene always gets me into suspicion like I don’t know who is who and so on. 🙂 It’s mysterious and the mysteriousness never ever fades.
3. The perfect, lush, gorgeous, disastrously vivid descriptions. MY this book makes me feel like an excruciatingly bad writer. 🙂 I felt Jane’s pain. I felt her relief. This book makes you BE Jane.
4. Just, the way it’s told. The way the book seems to be directed immediately to you. Jane confides in her readers. The book is like a very long monologue, a solo, it is personal. I LOVE IT. I think, for the Victorian times this must have been a very fast-paced, creative-style kind of book.
5. This book feels like a classic, but it also feels like a modern book. It’s the most easy-to-read classic, I think, and… I mean, it’s phenomenal. I can’t praise the style and plot and way-of-telling of this book enough. Charlotte Brontë, I take me hat of for you, I do.
6. So many wonderful characters. They are all so complex, and they come and go. Bessie. She was lovely. Then we have those St John people. All great characters. And even Grace Poole, yes, she was a great character. Admit it, she kinda spooked you, but she also really grabbed your attention.
7. The scenery. I totally saw it.
8. ‘Reader, I married him.’ Oh, just read this book for that quote. Their love in the ending was… just so vivid.
9. It’s funny when I was young I loved reading the first half of the book. I liked the part where Jane was still young. I never read the second part of the book for a long time. Now it’s the opposite – I want to go to the second half as quickly as possible. Because this book gets better and better.
10. When you close it, you will say ‘wow.’ You might not realise the wow-ness of it WHILE you’re reading it, but you will when you finish it.

Some things I didn’t like:
1. Because I’ve read the beginning so many times, it bores me just a little. But that’s my own fault, of course. 🙂
2. Mr Rochester, as I said, isn’t my favourite hero. Like, when he asked Jane to stay at his bed before he married when he talked about marrying Blanche Ingram?!! I mean, who asks a lady that? Asking a lady to stay with you at your bed before your wedding day to marry someone else? He’s creepy.

(I warn you, there are several & some are quite long…  But I struggled mightily to narrow it down to this few so— appreciate my effort! Lol! 😉 )

If people were always kind and obedient to those who are cruel and unjust, the wicked people would have it all their own way: they would never feel afraid, and so they would never alter, but would grow worse and worse.  When we are struck at without reason, we should strike back again very hard; I am sure we should– so hard as to teach the person who struck us never to do it again.

I sometimes have a queer feeling with regard to you — especially when you are near me, as now: it is as if I had a string somewhere under my left ribs, tightly and inextricably knotted to a similar string situated in the corresponding quarter of your little frame. And if that boisterous channel, and two hundred miles or so of land some broad between us, I am afraid that cord of communion will be snapt; and then I’ve a nervous notion I should take to bleeding inwardly. As for you, — you’d forget me.

I am no bird; and no net ensnares me: I am a free human being with an independent will.

Gentle reader, may you never feel what I then felt! May your eyes never shed such stormy, scalding, heart-wrung tears as poured from mine. May you never appeal to Heaven in prayers so hopeless and so agonised as in that hour left my lips: for never may you, like me, dread to be the instrument of evil to what you wholly love.

All my heart is yours, sir: it belongs to you; and with you it would remain, were fate to exile the rest of me from your presence for ever.

Jane! you think me, I dare say, an irreligious dog: but my heart swells with gratitude to the beneficent God of this earth just now.  He sees not as man sees, but far clearer: judges not as man judges, but far more wisely….  Of last, Jane — only — only of late — I began to see and acknowledge the hand of God in my doom.  I began to experience remorse, repentance; the wish for reconcilement to my Maker.  I began sometimes to pray: very brief prayers they were, but very sincere.

I thank my Maker, that in the midst of judgement he has remembered mercy.  I humbly entreat my Redeemer to give me strength to lead henceforth a purer life than I have done hitherto!