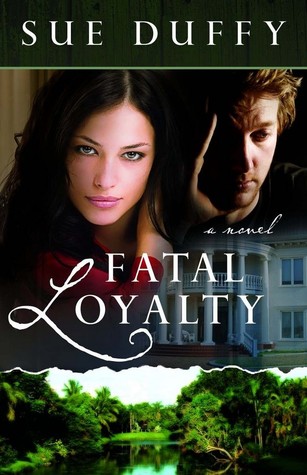 I finished my first book of the new year on Monday. “Fatal Loyalty” by Sue Duffy.  It was a pretty great book! I’d never heard of Sue Duffy before I got this book for Christmas.  Here’s a very quick sum-up…

Andie Ryborg’s dad is running for governor.  He’s also fighting really hard against drug dealers.  Those drug dealers are threatening him and his daughter in order to get him to drop out of the gubernatorial race.

Evan Markham is the son of a drug lord.  His dad has him watching, scaring, & threatening Andie.  Evan goes along with his dad’s plan in an attempt to keep Andie safe.  But who is he really keeping her safe from?  His dad or some other person who would be happy to see Evan & his dad out of the way as well?

I was kinda disappointed in the character of Manny.  He was supposed to be Andie’s bodyguard, but he didn’t seem to be around much.  For a while I even thought he might be in with the bad guys somehow.

Oddly enough, I think my favorite character was Leo Francini…  Not that I would like this man if he was someone I knew, but I really like the way his character was written and developed.

A funny quote from the book: “When life hangs in the balance, go fix yourself a sandwich.”